Wordpress vs Drupal vs Joomla - The CMS Comparison Guide 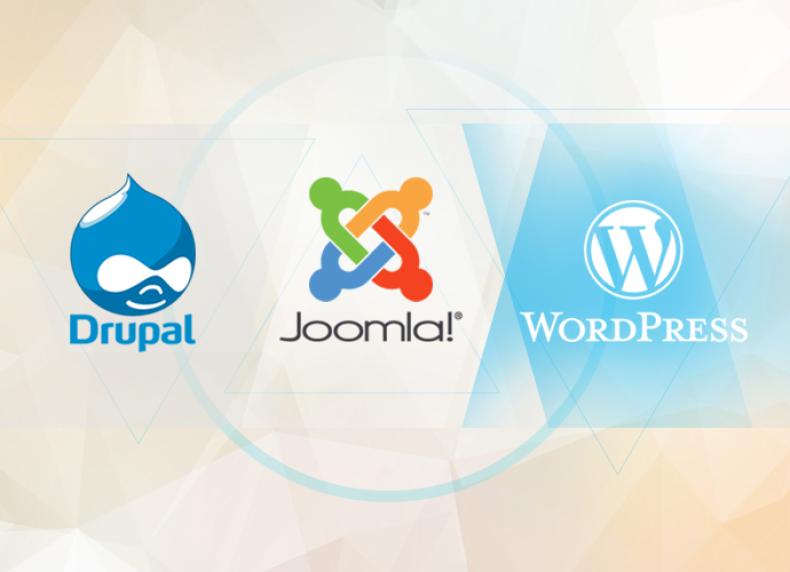 When it's time to select the best content management system for your needs, you have three main choices: Wordpress, Drupal, and Joomla. These competing platforms all have their own unique attributes that make it difficult to decide which one to choose. In this post, we will go over the details of each CMS and make a recommendation for you in the end. Even if you don't agree with our recommendation, you can read on to learn the most important characteristics of the big three CMS options and make an informed decision based on your needs.

Wordpress is the biggest player in the free CMS arena. It's been around for a while and it has a lot of appealing features. First of all, it is very accessible. In many ways, it is the default option for many major hosts like Bluehost. When you buy hosting from them, it's trivial to install and set up a Wordpress site in just a couple of minutes because a large part of the process is automated. That means it takes almost no effort to get started with Wordpress for most hosting solutions.

The biggest draw for Wordpress, though, is the plugins. The size of Wordpress and its vast popularity means that there is a large and active developer community centered around extending its functionality and creating new features. The possibilities for what Wordpress is capable of expanding continually because if a feature is attractive enough, someone will develop a plugin that accomplishes it.

Some Wordpress plugins are free and others cost money. Often, the paid plugins have free demos or trial versions that you can test out. The vast array of plugins means you don't need to reinvent the wheel; most key features are either bundled into the core platform or exist in one or more plugins.

But one caveat is that even though there are some free plugins that are great. Other super great ones are not free. Or if they are not paid, it is less optimized for your website performance.

The community is also generally supportive and helpful for new users. If you are concerned that you lack experience making your own site, then there are many people that can answer your questions, give you tips, suggest tutorials, and otherwise help out.

Having a welcoming community is a crucial aid because there is a lot that goes into creating your own site that you won't know without doing it firsthand. You need some help to get through unexpected hurdles and to point you in the direction of useful resources.

Aside from the plugins, Wordpress tends to not be very customizable. Many visual elements are either completely or mostly fixed. On the one hand, this ensures that you can't make a big mistake that will ruin the design or make the site hard to use. On the other, this tends to generate a certain same-ness across Wordpress sites that can be limiting.

Add in how easy it is to install and use and Wordpress is an extremely powerful and extendible CMS that is the best option for beginners and a strong competitor for everyone else. If you have a certain idea for a site, especially if it is a blog or is otherwise designed to mostly host your own content, then it's a good idea to check and see if there is a Wordpress setup that can get it done before looking at anything else.

The key takeaway for Drupal is that the user has more power, but also more responsibility. That means that the CMS can do more and deliver more customization than base Wordpress, but doing those things requires real web developer skills and coding experience. With Drupal, you can reach under the hood of the site more and mess around with the underlying code to get things exactly how you want, but without the right knowledge, you won't be able to get much done.

Drupal is less popular than Wordpress because of that skill barrier, but it does have a lot of plugins (modules) to offer. There are generally not as many as Wordpress offers, but the selection is still quite large. And all free modules are enough to build the sites. These play the same roles as they do for Wordpress, extending the functionality and providing new or easier tools. Unlike with Wordpress, you get more control over the plugins and how they work because of your greater access to the code of your site.

The more experience with coding you have before you start using Drupal, the better. It is possible to come to Drupal as an almost complete novice and still succeed, but it is going to take a very long time to troubleshoot your own site and overcome the obstacles that any site hits.

This is not necessarily a disadvantage of Drupal, because it does afford you more control in terms of both breadth and depth. But the less experienced you are, the more time these things will take. It can be a barrier to Drupal by inexperienced users. If you are running a small business, then you could be spending that time on other tasks instead.
More so than for Wordpress, you may need to hire someone to maintain and manage your site instead of doing it all yourself or with talent already on staff. That's an extra expense, and you'll need to carefully weigh whether it is worth the investment.

But this is to assume that your website is not a complex or highly complicated level, and you will not need to extend greatly later. The cost and time for these complex tasks in Wordpress most of time are greater than Drupal. You may have known that Drupal is known for its extendability, feasibility to customize. These make Drupal still an indispensable candidate in the CMS market.

Drupal's small, but dedicated community isn't as immediately accessible as Wordpress's is just because of its size. You'll have to get more done on your own. Again, the more experienced and self-sufficient you are with the languages of web development, the less of an obstacle this is. It's best to use Drupal for more advanced sites with deeper functionality over which you want to control, rather than just looking up the best plugin and dropping it into your design. This is the past, and as Drupal developers for years, we see Drupal 8 has been more aimed at normal users. And there is a vote of us for Drupal whether small or complex sites. There's nothing that Wordpress can do that Drupal cannot, even it helps you build the hardest kind of website.

Joomla occupies a bit of a strange place. It is a slightly popular than Drupal - a ratio of 10-8, but not as much as Wordpress. It offers more control than Wordpress, but not as much as Drupal. It's an in-between option that has a few tricks all its own. For example, Joomla offers some useful templates and packages to help you quickly create online store pages, social networks, and a few other predefined site roles. These would take a lot of tweaking to set up with either Drupal or Wordpress.

Unlike Drupal and Wordpress, Joomla doesn't use a lot of plugins and there isn't nearly the same development culture surrounding the CMS. There is a good selection of themes that can change the look of your site, and if you want to get more involved you can go deeper for greater control, but that selection of free resources just isn't there. If you become used to the convenience of plugins, it can be hard to go to Joomla.

Where Joomla shines is in its ability to quickly set up social networks and stores. These more complex constructions take more work under Wordpress and Drupal because those platforms are both a few years older than Joomla and weren't originally built with those ideas in mind. Now it is possible to create a store or a network in any of the three CMSs, but Joomla has the best native support.

If you want to use Joomla, then you should not need to hire a developer or a webmaster the same way you might if you were using Drupal. It is easy enough to use and there is better support than you get with Drupal. Wordpress is still better because of its community, but Joomla isn't far behind.

Joomla has a reputation for being the most flexible CMS. It lends itself well to just about any site role and none of them take much work to put together. That makes them appealing to anyone who might be using several sites in different roles or wants the ability to incorporate a variety of roles into one site.

After reviewing all the evidence, looking from the perspective of a normal user with little knowledge of development, Wordpress is the optimal way to go. It is popular, has such a vast library of plugins, along with with a strong community.

But this is not to mention the downsides. Awesome plugins are not free. There are free plugins for some great functions, but in many of them, the plugin code is not optimized for your site. You have to pay to get the best ones.

Building a normal site with a few functions with Wordpress is okay. But when it comes to large to super complex sites, it’s really hard to go with Wordpress. Most of the cases, the time and budget spent on these kinds of projects worked on Wordpress are significantly higher than Drupal.

If you are a highly experienced user who wants to get into the nitty gritty of design, then Drupal might be worth a look. The main concern is that if you want help or technical support, it is a lot farther away than with Wordpress. There are plenty of people who swear by Drupal because they want to feel in control of each and every element and how it functions down to the code. If that's you, then Drupal can give you everything you need along with its own impressive array of plugins.

The Power of Plugins

Joomla's in-between status tends to leave it without a clearly defined role. Take a look at it and see if the design or interface appeals to you. It's meant to be an intermediate jack of all trades CMS. While its base version can handle some things better than base Wordpress or Drupal, it doesn't have the same plugin culture. That means in terms of functionality the other two CMSs can always catch up and surpass Joomla in any given area just by developing some plugins to mimic or improve on what Joomla can do.

From a business perspective, Drupal has an additional cost in that you will need someone on staff with coding chops to run the site, but all three of these CMSs are free to use. Plugins can vary greatly in price, so do some research whenever you want to add functionality to find the right balance of quality and cost.