What Makes a Great Mobile App? 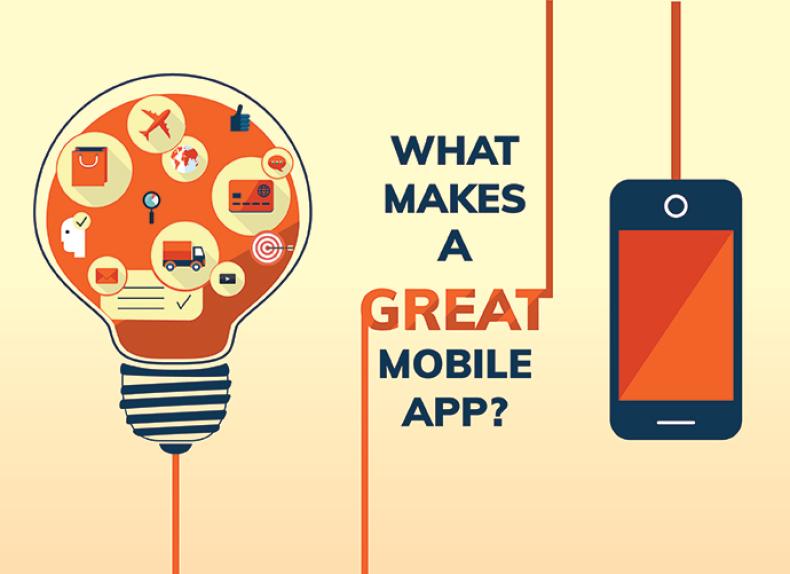 What is a mobile app?

A mobile app is a special type of software program used on a smartphone or mobile device such as the Android, iPhone, BlackBerry, or iPad.

There are many types of apps. Business apps, entertainment apps, or games like the famous Candy Crush Saga is also considered an “app”.

Let’s say you are running a banking business service for customers. Apart from having a website that allows access for all customers, you also release an app with the same function. Customers can now do business with you on your website or install an app from the app stores on their mobile device and use it for the same purpose.

What makes a good mobile app?

A great app is built on a great idea

All great apps are built on great ideas. What are great ideas? A unique standpoint that can differentiate a specific app from others, which also comes along with great execution.

Candy Crush Saga is a great app with a unique point of view that demands players to match colored sweets. After the game success, there are many other apps that were made as a result of the trending this game created.

But please remember: Not all great ideas were produced by group conformity.

I am working for a company specializing in developing mobile apps. What we do is our boss asks each of us to provide an idea and choose the final idea based on the number of voting each of them receives.

Are all great ideas supposed to be agreed by everyone? Not at all.

The course of history has proven that the majority is often wrong. The idea that everyone agrees on does not mean a great idea. The chance is it is even a bad idea. It is just an idea that seems familiar with most people, so they choose it.

Great ideas are always unconventional and sometimes seems a bit risk-taking. But that’s what the leaders in every field share in common.

If your objective is to generate short-term income, follow the trend (because it has proven to work). But if your goal is to have a great app in the future, believe in your gut and be courageous enough to go down the unbeaten path.

Am I marketing my app to Vietnamese users, French users or Indian users?

When you release an app, there’s always a specific region that you want to target.

I may have a great idea for a highly artistic mobile game, but will the people in my country appreciate this kind of artistry? You can actually answer this question just by looking at the type of media produced in your country and what type of media people like to share. If your app has the kind of artistry or content that people don’t like to consume, then you may want to think about changing your marketing direction.

Games like Candy Crush Saga may do well in every country because everyone can play it. But there are certain types of apps that will only appeal to people in a specific region.

With these types of apps, don’t think: “I am targeting all over the world”. “All over the world” equals to having no focus and instead of developing specific features and content that will surely appeal to specific people, you end up appealing to no one because you try to create content aiming to please everyone.

Great apps usually have a laser-focus content that knows its audience.

Poor and scrappy design indicates the fact that there are not many efforts put into the app.

Great apps often put efforts in even small details to inspire users and other app creators.

A good app user interface is simple, easy to use and does not have elements that don’t add values to the app. Too many unnecessary features will cause users a hard time to figure out how to use the app. Developers must think about the primary content that users will care about, how a smartphone is viewed in different environments to create a logical user’s path and make it obvious and easy to use. It’s important that someone must test the usage path of the app. If you find it hard to follow, then someone else may feel the same way.

Apart from graphics, the design of an app also includes the sound effects and animations of the app. Sound effects are incredibly important. Let me give you an example: Candy Crush Saga.

Because only when turning on the sound, it’s when we feel like we are truly “playing” the game if you know what I mean.

The sound or animations also add an emotional appeal to the app. For example, with the game “The End Of The World”, a story-telling game type with gorgeous visuals and creative plot, the sound of the clock ticking makes it much more nostalgic to users and adds much more emotions to the game, making it a piece of art.

The app is fast to respond and stable

People are getting less and less patient these days. How many times have you wanted to smack your laptop just because the Internet is a bit slow to respond?

The speed of everything is getting faster; therefore, people who are used to it won’t have much patience to wait for your app to respond.

Imagine how annoying it would be for people to experience heaps of crashes when they use your app.

If you have a photo editor app, and when you user has already proceeded to the part of sharing his or her photo on Facebook, the app crashed. It must be super annoying for that user who has spent times to create a good photo and miss the opportunity to share that photo with their friends.

All great apps have fast response times and people only need a few seconds to do what they mean to do. A great app doesn’t crash often and isn’t slow.

It’s highly important that someone needs to test the apps and put themselves in user’s shoes so developers can improve the app before it is released in app stores.

There are 3 rules of app design, according to Yahoo’s Marissa Mayer: The Two Tap Rule, the 5-Point Rule, The 98% Rule. According to Marissa, the Two Tape Rule is simple: “Once you’re in the app, is it two taps to do anything you want to do? If no, time to redesign the app”. The Yahoo Flickr app is an app which has used this to great effect. Read more about the 3 rules of app design.

It all starts from a great idea and a courageous, passionate individual or team to follow that idea until the end. Don’t be too easy on your product and turn a blind eye to the weak spots. It’s amazing to me how people often ignore problems until someone else points it out. If you happen to be a team player, always say something when you see something not right. My experience shows that perhaps others are thinking the same thing too; they are just afraid to voice their opinions.

A great app is built on a unique idea, a good understanding of the high-end users and their behaviors, psychology, and habits, has good speed, response time and finally an intuitive user interface.

Marketing may be the force that increases your app visibility and exposes it to potential users, but in the end, it’s always the true value that your app offers which creates its success and retain users.