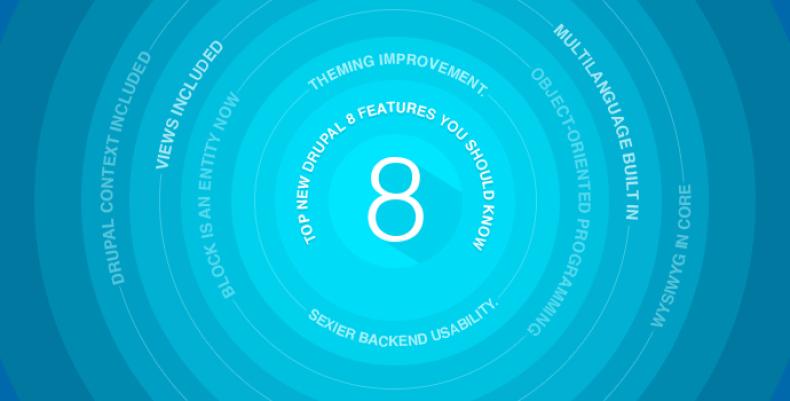 Nearly 4 year ago, Drupal 7 official version was released, and it is a huge upgrade from Drupal 6. According a statistics on Nov 2, 2014 from Drupal.org, nearly 1 million websites are using Drupal 7. This figure is impressive, and actually it is bigger as this statistics is just based on the update status of Drupal core.

But it’s the cycle end of a technology, we are awaiting something excitingly new – a technology that will turn our task of developing Drupal websites become more efficient than ever. That’s a newer version of Drupal – Drupal 8.

We’ll help you answer these questions.

We’ll present our views on some of the most useful new Drupal 8 features based on our 4 years developing numerous Drupal 7 websites, creating 50 premium Drupal themes and some recent Drupal 8 projects.

Drupal is called a CMF (content management framework) itself because it defines a dynamic infrastructure with various complex but well integrated parts in order to constitute a website. To work with Drupal, you have to know how to work with these parts, and how to combine them together. This is a hard & time-consuming job.

It will take normal users with no prior technical knowledge almost 1 month to work well with Drupal while this can be done in 1 week in Wordpress, or 2 weeks in Joomla. Drupal 7 has been geared more toward users but still it has a little learning curve.

But we see a new change. Drupal 8 is a big upgrade in usability experience and backend interface. You will find it much sexier in its look and easier to use. Using Drupal Backend without coding knowledge, users can create almost websites from small to medium size.

Drupal 8 has more flexibility in theme customization via its backend interface. It is immensely useful for both normal users & developer. In Wordpress, if there’s a complex function, non- technical users will not be able to implement it while it can be done in Drupal by users with little to no technical knowledge.

Drupal 7 uses PHPtemplate engine, which allows embedding PHP code into Html. This is not suited for users with no PHP coding skills. And we see a great change in Drupal 8. The newest version uses Twig, a standard providing an easy to use format for non-technical users.

This together with Drupal backend helps a user with no prior coding knowledge able to manage a theme fairly well.

Drupal 7 languages and translations are supported by a third party. And we face tremendous difficulties working with it. There’re lots of resources to manage – a long menu, languages divided into lots of clones, nodes increasing many times respectively

The good news is that Multilanguage has been in Drupal core. Users can now have an easier time working with content, and integrate a language they wants with less hassle.

It’s not a myth to say no one using Drupal without knowing Views. It is an indispensable module which is currently used by approximately 840,000 Drupal websites. In essence, it takes advantage of Drupal strength, especially Drupal entity. By this, Views allows showing every type of contents users want just by configuring in the backend.

However, Views is implemented by a third party. In Drupal 8, it has become a built in module to support Drupal core better, improve performance, and become more standard. This thereby ensures that Drupal will be more flexible and usable.

Block is an Entity now

Drupal was developed from the old version of PHP. Basically, Drupal up to the 7 version isn’t an OOP platform (object-oriented programming). It does improve over time; however, there’re still some remained features of NON-OOP. This brings in some setbacks for modern programming, and for big projects which require high level of design, maintenance, and unit test

Drupal 8 is based on a highly potential framework - Symfony. Drupal has made a great improvement in OOP. This puts a great advantage for professional coders, and for companies with high standard of programing, unit test designing, and maintenance.

Drupal 7 has an extremely useful module named Context. It allows setting up Drupal components, including blocks in different conditions. Specifically, Context lets you create various instances of a same block. And with every instance, users can config it individually when it will appear, and the position of the instance. This module has been a built in feature of Drupal 8.

For the first time, we see the utterly useful editor Wysiwyg in Drupal core. What we like in this version is that the checkbox to customize your toolbar has been replaced by a drag and drop interface. It’s really convenient.

Another improvement is the ability to edit the content directly on the page it is displayed. Let’s say I want to edit my uploading image, I don’t have to be navigated to another page, tab, or overlay to configure it.

Web service out of the box

In the past, websites were only for desktop and web services were only used for websites using a service from other systems to name a few, Google Map, Weather forecast, ....

Nowaday, with the advent of many different devices like mobiles and tablets, web services are more important than ever. Although there’s responsive design technology to permits html shown responsive on different interfaces, there’s a limitation of content surplus and overloaded resources for small devices. To improve performance for this kind of design, web services have been applied so that

1. Server provides not only a responsive website, but also a web service to reflect the results in JSON/XML.

2. Clients not only access their website via browsers, but also connect via an application for each platform connected to the web service and get the best performance for each device.

In Drupal 7, web services are supported by a third party module – Services. And since it is such an important and prominent function, Services has been included in Drupal 8 core.

Improving in the theming system

We have written an in-depth articles about theming change, and how to do it in a theming tutorial.

These are the important updated features that we see. And these make Drupal 8 more incredible than ever for any kind of Drupal users from a newbie, a content moderator, a webmaster, a developer to a high level web application design and architecture programmer.

As a big proponent of Drupal 8, we’ve been one of the first Drupal 8 themers on Drupal.org. And we’re going to release some Drupal 8 beta themes in the next few weeks.